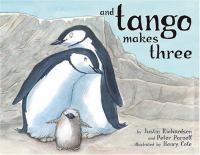 And Tango Makes Three is the bestselling, heartwarming true story of two penguins who create a nontraditional family.

At the penguin house at the Central Park Zoo, two penguins named Roy and Silo were a little bit different from the others. But their desire for a family was the same. And with the help of a kindly zookeeper, Roy and Silo get the chance to welcome a baby penguin of their very own.

Selected as an ALA Notable Children's Book Nominee and a Lambda Literary Award Finalist, "this joyful story about the meaning of family is a must for any library" ( School Library Journal , starred review).
Publisher: New York ; Toronto : Simon & Schuster Books for Young Readers, c2005
ISBN: 9780689878459
0689878451

Some content below may have been reported by users for containing spoilers or offensive content. Learn More

I was really disappointed at the content of the book . I don’t think the way the story was worded was the best way to illustrate the way the true story happened , and pushes homosexuality at our children at way too early an age and might confuse their idea of opposite sex couples if that’s what their home life is if they haven’t been exposed to anything else yet . I wouldn’t rent it again . Just , parents beware is my only opinion . The story looks cute , but if it’s not something your open about in your home as in ours , you won’t enjoy the book and find it very offensive . It could be better if the author worded the story better . I think it should be in the adult section so parents can make the decision to read it to their child , or not .

Cute book about families and how they can be different-but still be a family.

Love. It's all about LOVE. I LOVED this book!!!

I like the idea and the illustrations, it's based on a true story. it's can be a good resource for little kids. My little read and when I asked her about the story she said:" even they can't have babies didn't stop them to adopt one and rise him and do what the other couples can do". I love what she said and understand that keep doing what you want.

Great love story for all ages not just for children. It turns out to be a true story about a couple who are given a chance to adopt and raise a baby, proving that love goes beyond being human. It teaches us that a very kind and thoughtful person (the caretaker) can give the couple an opportunity to raise a little one and make everyone happy and a better world. It also gave us the curiosity to do further research on animals. We learned that love can go beyond any limit. A must read book.

This book teaches children of all ages some very important messages about acceptance. We are all who we are for a reason and sometimes, that reason is to provide love for those neglected by the rest of society.

This book is wonderful!
It's the perfect length for a bedtime story, lovely illustrations, and as an extra special bonus it's a beautiful, heartwarming story that spotlights how there's more than one way to be a family.
I checked this book out not knowing anything about it, and after one reading with my infant daughter I bought it!
Incidentally, it's based on a true story.
Highly recommended.

Roy and Silo, two male penguins at the New York City Zoo, are a little bit different—they do everything together, including building a nest. And when their zookeeper sees this, he gives them an egg that needs to be cared for, and together, Roy and Silo raise Tango. Full-color illustrations in a picture-book format.

Tagged as Offensive (Hide) (Show)
DebAK Sep 23, 2014
This content is tagged as offensive and is hidden.

To push the idea of homosexual relationships on children--clearly this book's intent--is shameful given the age at which this book is directed. Besides, if one considers the rarity of homosexuality amongst animals, the need to write a book about it is only considered by the ones who have an agenda! First, the book's "Description" does not tell you the complete true story: Silo eventually found a female mate and left his male partner! Second: the book is not BANNED anywhere. You can buy it even on line. This is typical American Library Association brain-washing lingo. (If you take the time to research this case, you will find out that the zookeepers wanted to introduce female mates but gay organizations argued against it so the zookeepers backed off (thus leaving the two male penquins alone). If the zookeepers were allowed to do their job the two pinguins would probably have had female mates and their own offspring!)

Animal behavior is just that animal behavior. Adults taking care of young. They have no agenda or judgement of morals. It was just an enjoyable story.

EuSei thinks this title is suitable for 18 years and over

LibrarianGabriel thinks this title is suitable for 2 years and over

dnl84 thinks this title is suitable for 2 years and over

DebAK thinks this title is suitable for 18 years and over

asrushing2014 thinks this title is suitable for 10 years and over

"Wherever Roy went, Silo went too"

"The animals make families of their own"

"Now Roy and Silo were fathers. 'We'll call her Tango,' Mr. Gramzay decided, 'because it takes two to make a Tango.'"

"Now Roy and Silo were fathers. "We'll call her Tango." Mister Gramzay decided. "Because it takes two to make a Tango."

"But one day Roy and Silo saw that the other couples could do something they could not."

This book is about Roy and Silo, two male penguins adapting the role of parents to Tango. They live in Central Park Zoo. Roy and Silo did everything together like swim, build a nest and play before taking on the role of a parents. Roy and Silo tried several ways to get a child. Tango was taken from its original parents because they couldn’t provide adequate care. It is a replica of a real world situation.

"And Tango Makes Three" is about two male penguins being attracted to one another. They want to have a baby and be just like other penguin couples. They try by getting a rock that looks similar to the eggs the other couples have and try to hatch it. After sometime the zookeeper realizes what the two penguins are trying to do and helps out by giving them an egg to take care of. Eventually the egg hatches and "pop!" out comes Baby Tango.

There are many different types of families in the zoo, but Tango's family is not like any of the others, she has two dads. This picture book is based off the true story of two male penguins who became partners and raised a penguin chick in the New York Central Park Zoo.

It is a unique story about two penguins who share similar actions like those of other penguin couples. These two male penguins, Roy and Silo, are given the opportunity to nest and care for an egg of their own. They care for the egg, love the egg, and eventually the egg hatches thanks to Silo and Roy. Nice story.

This story is about two male penguins named Roy and Silo who care for an egg, which eventually hatches and that they name Tango. They live in a zoo, and many families of all kinds come to see Roy, Silo, and Tango.

This amazing story introduces a real life situation about two male penguins who falls in love and lay an egg, at the Central Park in New York.

And Tango Makes Three is an endearing and thought-provoking true tale of two male chinstrap penguins at the Central Park Zoo that fall in love, hatch an abandoned egg, and raise the offspring.

Other: Strong messages of love, acceptance, and family. Beware of exposing your children to any of these themes or they may turn into (gasp) kind, caring humans.

Find it at my library